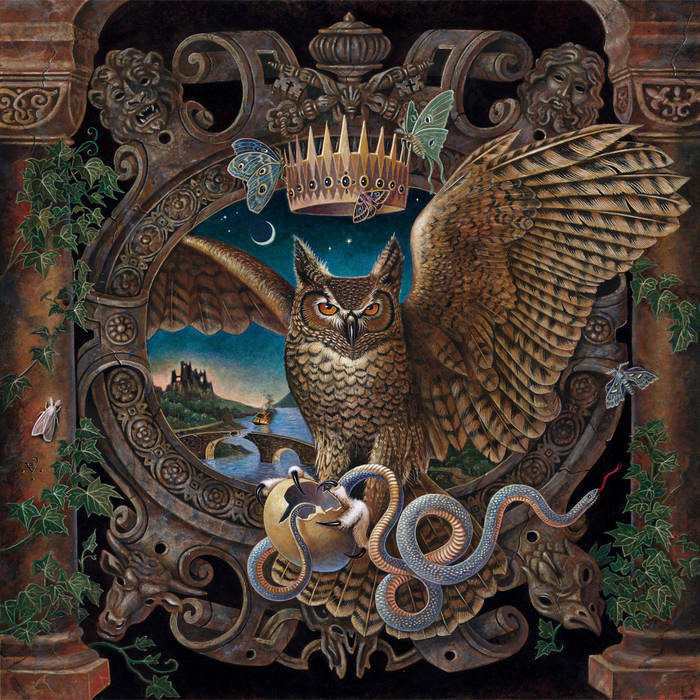 bcb723 At face value, this is straddling a fine line between perfection and pretension. 2 songs, 36-ish minutes and what appears to be a missing Styx cover from the 70's. But then you hear the music and it all makes sense. The first track brings everything you need to know about what makes this worth the time investment - epic melodicism that matches its grand scope. But "Nightbridge" is something else, just a monster song with a perfect build & release. Great stuff (and I'm a Styx fan, by the way...) Favorite track: Nightbridge.

starvynth An interesting first outing for this trio, Hierophant Violent is a fairly accessible ambient/drone offering, particularly as the songs becoming increasingly structured as they progress.

effervex Just a great album. Atmospheric, light when it's light, and heavy when it's black. Favorite track: Nightbridge.
more...

Hypnotic Dirge Records is pleased to announce that we will be working with Bay-area trio Forlesen for the release of their debut album “Hierophant Violent.”

Comprising of two tracks nearing twenty minutes a piece, “Hierophant Violent” is a delicate and hypnotic sensory experience incorporating a myriad of styles and influences to craft a work of art which is cathartic and illuminating. Each track is a journey unfolding different aspects of the band’s sound, drawing inspiration from artists as diverse as Low, Leviathan, Skepticism and Dead Can Dance.

As the band states: Forlesen's "Hierophant Violent" is an immersive, lush, psychedelic blend of dark ambient, epic doom, slowcore and shadowy black metal. It was conceived during a time of immense personal loss and emerged as something both beautiful and terrifying to us. We hope it will give the same feelings of shadow exploration to our Listeners.


Featuring members of Lotus Thief, Botanist, and Kayo Dot among others, “Hierophant Violent” is a brilliant debut from a cadre of musicians already in top form who have lent their efforts to a new vision. Appropriately transfixing artwork by Benjamin A. Vierling (Aosoth, The Ajna Offensive, Joanna Newsom) will adorn this album, which will be presented as a 6 panel digipack.

The album was engineered, mixed and mastered by Jack Shirley (Deafheaven, Oathbreaker, Mamaleek) at the Atomic Garden with additional recording by Forlesen.

“Hierophant Violent” will be released through Hypnotic Dirge Records on April 18, 2020

"Hierophant Violent‘s abstract sounds woven into a droning, doomed atmosphere find themselves at a more advanced end of the music spectrum. Enter listening to this album with an open mind and expanded attention span, because you will be rewarded."
-Invisible Oranges

Evocative, and demanding of a patient and willingly immersed mind.
-Grizzly Butts

"The album has a cinematic quality to it, creating lush psychedelic soundscapes that wash over you as you delve in deeper."
-Wicked Metal Review

"Hierophant Violent is a compelling example of distinctive, idiosyncratic music played with skill and passion. This album is quite an experience, one which I greatly recommend all to have."
-Wonderbox Metal

"Hierophant Violent’s lush textures and moods, which meld and drift effortlessly together, sound gorgeous. The album feels full and rich, with every instrument allowed the room it needs to breathe.
Forlesen will undoubtedly occupy a spot on my year-end list and Hierophant Violent also has the – perhaps dubious – honor of being my first 4.5."
-Angry Metal Guy