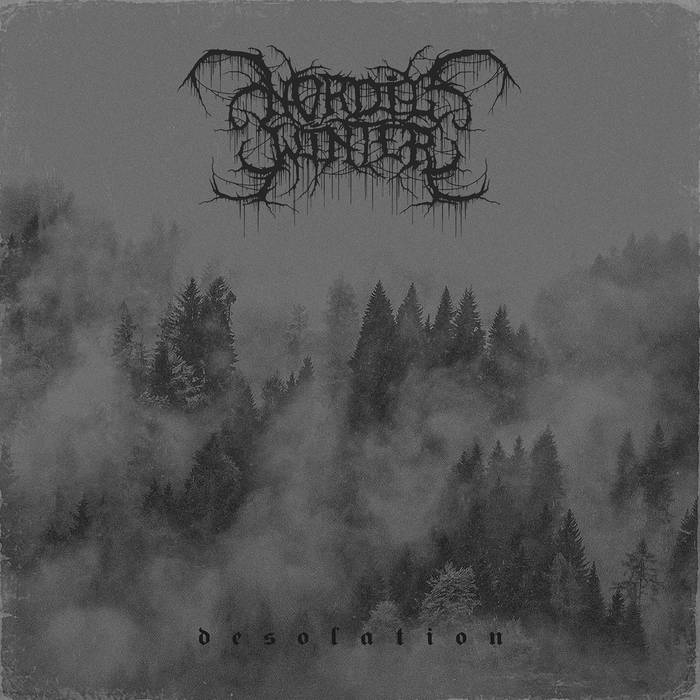 Jarak So good I ended up buying it twice 😅

DELETEMYEXISTENCE I am absolutly in love with this album i pre-ordered it i cant wait to get my copy support canadian black metal scene!!!!!

Fraz I missed this release the first time around. I'm so glad I didn't miss it this time. The essence of a dichotomy lies within the music. It is at once harsh and cold, and yet manages to be emotive and atmospheric. Late night, dark. Music for the soul.

Originally released on June 20, 2020, Nordicwinter’s “Desolation” followed the release of “Requiem” in April marking the project’s second full-length release in a span of 3 months after a 13 year gap between the debut album “Threnody” in 2007 and these two new records! The renewal of the Nordicwinter surely did not go unnoticed with “Requiem” and “Desolation” both receiving their fair share of praise, and while “Requiem” was released through Dark East Productions, “Desolation” was self-released and its limited first pressing has recently sold out so in addition to releasing the new Nordicwinter full-length later this winter, “Desolation” will see a re-issue through Hypnotic Dirge Records, released as a 6 panel digipack on January 15, 2020.

A chilling soundtrack for the dead of winter, Nordicwinter is a solo atmospheric/depressive black metal band from Quebec, Canada founded by evillair (Umbrarum Tenebrae, Kalseroth, Graven Dusk). Laden with haunting melodies and cryptic vocals, Nordicwinter creates music that is crafted to obliterate all remnants of light and hope leaving only despair and death. This is high-caliber Depressive black metal with a cold and desolate atmosphere that retains a certain amount of bite and enough musical skill and variety to keep you invested, all the more compounded by painful shrieks that perfectly encapsulate the mood and blend seamlessly into the mix to enhance the melodic undertones of the music. If you are a fan of bands such as Xasthur, (early)Forgotten Tomb, Shining, Austere, NONE, and Nocturnal Depression, then Nordicwinter should be right up your alley as well.

The first 100 orders will receive a free woven patch of the “Desolation” emblem.

"...The album then fades away with the final instrumental “Last Rites” which leaves you wanting more and that shroud of darkness doesn’t return until you hit repeat all and go through it all over again.
Heartrendingly bleak and desolate."
-This is Black Metal

"Most songs are downright infectious to experience, as the venom works its way through your ears into your brain with astonishing speed, and it’s with each successive song that this album impresses the listener. There is a lot to discover here, rewarding consecutive listens. Also the vocals might leave a lasting impression on you with their howling and desperate tone."

"...If one adds to all this the flawless production, then it certainly justifies the fact that this Canadian work is characterized as a masterpiece of atmospheric Black Metal sound."
-The Gallery

"...It’s really rare to find that the music and lyrics go hand in hand together this well, Evillair has done an astonishing job in trying to send us a message, some hard-to-swallow pills.
And by now I can say that, this project, not only in Quebec, but in the world is too slept on. NordicWinter deserves much more attention."

"...This is well-written music that’s frosted and cold, but still has a warm, expressive heart. The album’s melodic depth goes far, and the songs are constructed with clear care and thought.
...Full of atmosphere and emotive depth, (enhanced by well-considered keyboards), this is a high quality and very enjoyable album that deserves a wider audience than it is likely to get."
-Wonderbox Metal

"...Here is the moment, where craft becomes art and the music not only touches the ear but the soul as well!"

During pre-orders, the minimum price is set to $5.00
Pre-ordering a digital album could be thought of as a voluntary donation to help fund future releases and merch, while also receiving the album automatically to your email on release date.
Of course, all HDR releases will always remain available for no minimum price after its release.