by Altars of Grief 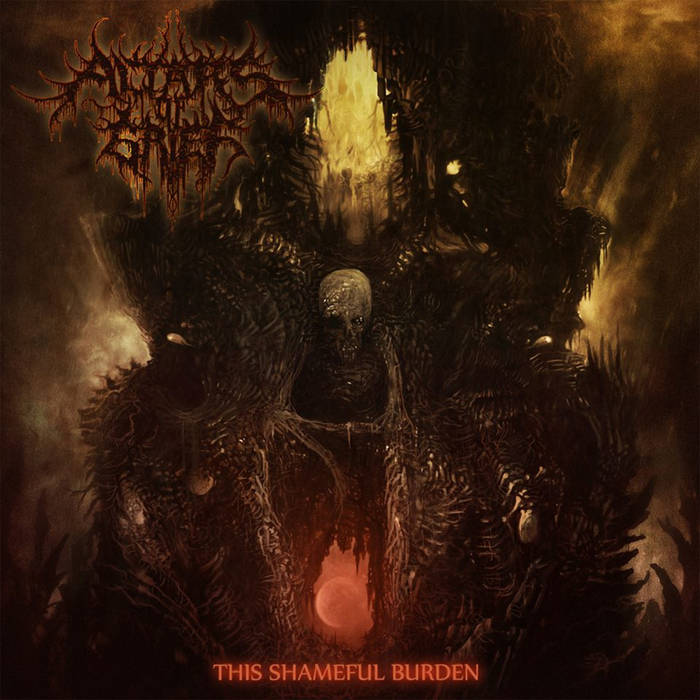 Lawrence Hollman this is a great one of this genre and metal in general.

spawnofchaos A solid death/doom offering. Enjoyable to listen to but didn't find too many tracks to be particularly memorable Favorite track: Only Our Scars.

mtg13 Although not quite as good as the follow up Iris, this is still a masterpiece in melodic doom.

13/10 Favorite track: The Plague that Haunts the Darkness.

Metallurgical Fire I’m glad this was rereleased. More of a death-doom than blackened doom album to my ears, but we see here the potential that was fully realized on Iris. There is a great deal of progression from this album to Iris, but this is a solid debut. Update: I’m a liar. It’s a pretty damn fantastic debut. Favorite track: In Your Arms, In Ruin.

Originally self-released by the band, “This Shameful Burden” has been out of print for years, and alas it is finally time for this piece of Altars of Grief’s history to be made available once again. The 2018 edition of “This Shameful Burden” has been updated for a 6 panel digipack with an entirely different layout and design featuring artwork and photography from Necrographix, Wa’guna Wirya’wan, and Josh Langham to go alongside Sam Nelson’s original cover art. Bonus tracks from the “Of Ash and Dying Light” split, previously only available on vinyl, is also included on this release. Recorded by Justin Bender at Blue Door Recording in Regina, SK in April and November 2014.

This Shameful Burden was recorded by Justin Bender at Blue Door Recording in Regina, SK in April 2014 and was originally released on August 6th, 2014.

Music by Evan Paulson & Altars of Grief (except for track 6, written by Damian Smith)

Guest vocals on “In Your Arms, In Ruin” and “The Plague That Haunts The Darkness” by Erik Labossiere

During pre-orders, we set the price to $5.00
By pre-ordering you are directly supporting the label's activities and receiving the album automatically on release day.