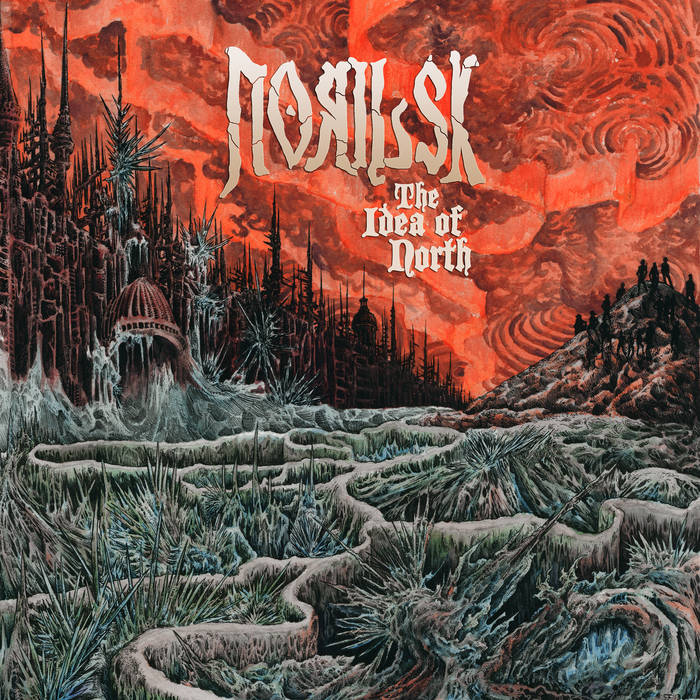 Darknight The Idea of North sounds like the nightmare of everyone's death doom vision into hell. Kick back and feel the pressure of your ears being crushed. Absolutely fantastic album!! Favorite track: Throa.

Metallurgical Fire This one’s a bit tough to pin down, but I thought I was hearing some Melvins, Helmet, Rollins Band in there at times, a 90s musical atmosphere. The album is a bit cleaner sounding than death or doom often sounds. It’s an interesting listen. There’s a fantastic guitar solo on Planete heurt, worth an album purchase on its own merits. Favorite track: Planète heurt.

Sonny92 As the album began I thought "Oh great, another generic death doom album **weary sigh**". But this is, in fact, an unexpected gem of a release. More focussed on the "doom" rather than the "death" aspect, this album features some very accomplished songwriting. The performances are decent and the throaty, growled vocals are effective. Overall, I felt the album engaged me far more than the usual death doom release. A very promising debut and a worthy addition to any Doom collection. Favorite track: La liberté aux ailes brisées.

All Glory To The Hypnotoad

"The album, as a whole, is a slow moving glacier, much like the Japetus EP that came before it, but it is much thicker, longer, and brutally unforgiving, not stopping its steady march from the Northern mountains to the Northern ocean, where it will continue as icebergs destined to down ships. It’s a ride that you can’t just hop onto and off of when you are ready. This is an album full of nuance and attention to detail, and should be played as such, preferably with headphones. Throw in a doomed cover of a Belgian pop song, and you’ve got yourself a damn near perfect listen. Beyond recommended, I will probably go through two copies of this album this year alone."
-Crown of Viserys

"And one of the great strengths of 'The Idea Of North' is that it never sounds like a collection of ideas in search of a home: quite the opposite, in fact. There's a completeness in the way it grabs initial attention with the rousing, sludgy stomp of the first half, then evolves into a more chilly and thoughtfully introspective atmospheric beast (in places, even reminiscent of Dolorian); like a snow-fanged apocalypse avalanching across the world, leaving the last survivors huddled in the frozen wastes of its wake. The band call it 'crafted for the winter season', but by the visceral and lonely conclusion of the title track it seems quite possible that winter will be eternal."
-Doom-Metal.com

"This hour-long ode to the Arctic is a monolithic jamfest, through and through. From beginning to end, The Idea of North is a fantastic example of what modern doom metal should sound like. Thick, slow as molasses, and greatly atmospheric, Norilsk’s debut has exactly what it takes to land this band a spot in any doom metal fan’s list of bands to look out for."
-Heavy Blog is Heavy

Oakland producer Mejiwahn chats about his breezy and transportive LP.