Into the Arms of Darkness 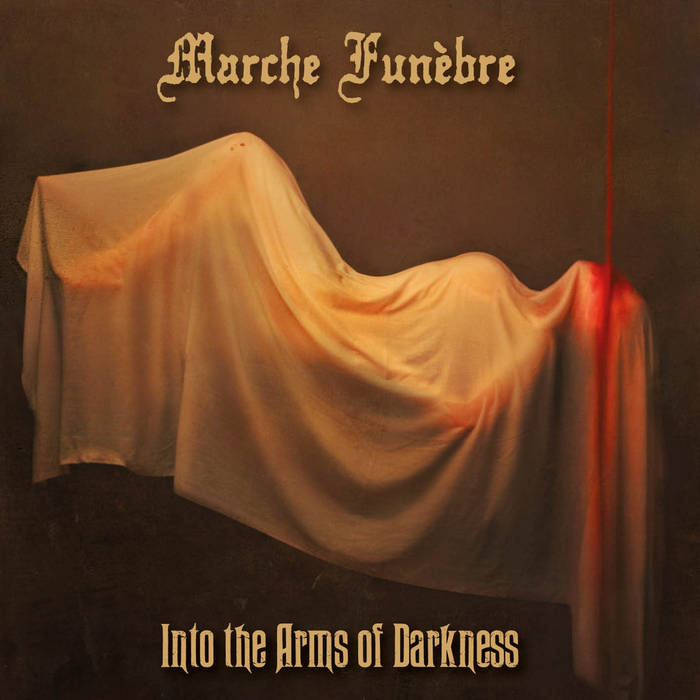 Metallurgical Fire This is a fantastic album. Everything is first rate; death vocals, blackened vocals, beastly percussion, solid melodic songwriting, but still very dark and atmospheric. The only thing diminishing my enthusiasm is the clean vocals on the album. They’re not bad, just a bit jarring from the rest of the sounds on the record. Still, a great album with some truly great death-doom atmosphere. Favorite track: Capital of Rain.

Jose Garcia The more I listen to Marche Funèbre's new record, the more I'm feeling a calming, chaotic wave emotions which all come at once. Strong representation of Paradise Lost (Gothic era) with tracks like Lullaby of Insanity & Deprived (Into Darkness). Favorite track: Lullaby of Insanity.

hiddel4 Had the chance to see them live, killer show! These guys will hopefully get big. Amazing vocal and guitar work Favorite track: Deprived (Into Darkness).

Hullible Really great work here. Every song is incredibly catchy, and the vocals are top notch. I really like the mix between clean and distorted vocals, and I think they blend them really well together. Is now one of my favorite metal albums. Keep up the good work!

Mike Liassides By turns stirring, turbulent, romantic, furious and thoughtful, 'Into The Arms Of Darkness' is a densely-packed and compelling album from one of the more distinctive-sounding bands in the genre, and it absolutely deserves to grab your attention.
Full review at: www.doom-metal.com/reviews.php?album=3102 Favorite track: Uneven.

In conjunction with the new split album with Eye of Solitude, Hypnotic Dirge Records is proud to be re-releasing Marche Funèbre's magnus opus Into the Arms of Darkness, on February 22. Originally co-released almost one year to the day on BadMoodMan Music, Moscow Funeral League and Frozen Light, the album received praise among the doom metal scene for its mature songwriting and fine balance of traditional doom and doom-death elements, making it Marche Funèbre's best album to date, and a must-have within the genre. After selling out, Into the Arms of Darkness will see a noble second edition on 4-panel digipack, expanded with bonus track "Lost," from the same writing session and previously only available as a 7" self-released in 2015. The album will be co-released with Moscow Funeral League and Frozen Light, and Hypnotic Dirge Records will have a limited number of 100 copies.

"By turns stirring, turbulent, romantic, furious and thoughtful, Into The Arms of Darkness is a densely-packed and compelling album from one of the more distinctive-sounding bands in the genre, and it absolutely deserves to grab your attention." - Doom-Metal.com

"Into The Arms Of Darkness shows Marche Funèbre having found their final sound and putting themselves midst the big names of doom/death metal." - Doom Metal Front

"Into The Arms of Darkness is the bands third release and is going to satisfy and please the band's many fans as well as anyone who's curious about the whole genre of doom metal heavily influenced with a old death/black metal verve." - The Metal Gods Meltdown

"It is obvious: this happens to be the best album of Marche Funèbre so far (…)" - Lords of Metal

"Going for the grandiose segment of their sound, the band brings out plenty of familiar elements featured throughout here that make for a rather impressive outing." - The Metal Observer